Swimming was once a popular pastime for the students of Centenary College. From swim classes to the Aquatic Club, there were plenty of opportunities for our students to get in the pool!

The original swimming pool was built in the Autumn of 1908 and opened in November of the same year. The pool was a gift of George J. Ferry, President of the Centenary Collegiate Institute Board of Trustees. It was attached to the gymnasium, later remodeled into the Ferry Arts and Music Building. In 1961 a new swimming pool was built adjoining the Student Union Building, which was located on the site where the John M. Reeves Student Recreation Center now stands. Named the George J. Ferry Natatorium, that swimming pool is still in use today.

The pool was just used for swim classes and life-saving courses until the 1930s, when the school starting hosting a yearly interclass swim meet. Each class of girls elected several of their best swimmers to compete in fun events including the egg and spoon race and ‘swimming with arms alone’. 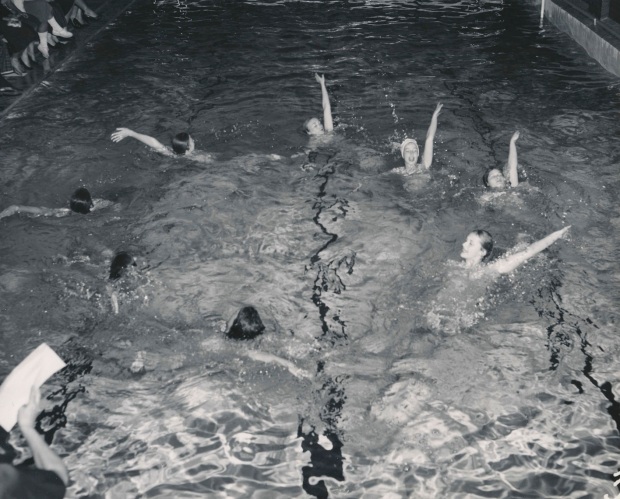 Not exactly synchronized yet, but they’re working on it

The 1940s marked the beginning of the Aquatic Club, which promoted interest in swimming, life-saving, and water fun. The Aquatic Club’s first show, called “The Aqua Rhythms of 1946”, featured several original acts and costumes created by the performers themselves. The shows gained a reputation for greatness and quickly became a delightful yearly event.

Professor of Physical Education Bette Rhoads, herself a holder of several state American Athletic Union swimming and diving titles and former National Junior High Board Diving Champion, coached the swim teams and synchronized swimming team from the 1950s to the 1980s.

The Aquatic Club disappeared sometime between 1977 and 1981, and the swim team disappeared about a decade later. The swimming pool still gets plenty of use, though – Centenary offers pool hours for our students as well as swimming lessons and open programs for members of the local community.