After the fire of 1899, Centenary was in need of a new administration building. Members of the Board of Trustees were determined to rebuild and asked several architects to prepare plans and bids.

The man who was eventually awarded the contract was Oscar S. Teale, a prominent architect of churches and homes in the New Jersey and New York area. To limit the damage fire might pose in the future, he separated the north and south dormitories (for young men and women, respectively) from the main administration building, which still stands on the same footprint as the original school. From Jefferson Street the optical illusion is of a single, massive structure taking up an entire block. 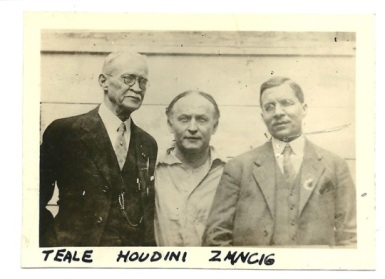 Oscar Teale was also very interested in magic and was a good friend of Harry Houdini. Teale has written books about magic, one of which is in the collection of Centenary’s Taylor Memorial Library. When Houdini died, Oscar Teale served as one of his pallbearers and also designed Houdini’s cemetery monument in Queens, New York.

By September 1901 the new buildings were put into use, even though not all construction had been completed. Years later the main building would be named in honor of Dr. Edward Seay who served as eighth president of Centenary from 1948 until 1976. Today the Seay Building is included in the National Register and The NJ Registry of Historic Places. – CBB