Few details are known about the Art Prize at Centenary College, but what is known is that each year a distinguished piece of student artwork was awarded with the title of Art Prize Winner. 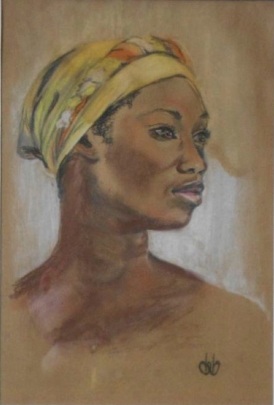 Many of the winning paintings used to hang in the entrance hall to the President’s House. Now several of them are housed in the Taylor Memorial Library Archives.

Many items have been donated to the Taylor Memorial Library over the years but not all of them seem directly related to telling Centenary College’s history. A number of items in the archives were donated by faculty, alumni, or other members of the Centenary community, so there are many objects that once held personal significance to the donor, or were donated by someone with personal significance to Centenary. This photograph of Oscar Wilde, presented to the college in 1958, is one such item, seemingly out of place among the yearbooks, class photos and other ‘Centenariana’ stored in the archives.

It came to Centenary College through Dr. H. Graham DuBois, a member of Centenary’s faculty for 33 years. He was a poet and playwright like Wilde, an English professor at Centenary College for Women from 1929 to 1963, and the Chairman of the C.C.W. Division of Humanities from 1947 to 1959. The Mrs. Montell of the inscription was his grandmother, Mrs. Charles Montell, who had been a friend of Wilde’s uncle, Ledoux Elgee.When Wilde visited Baltimore on a lecture tour of America, Mrs. Montell invited him to tea as a courtesy to a family friend. He accepted her invitation and later sent the photograph to thank her.

Dr. DuBois, left, and Dr. Seay, president of the college

Dr. DuBois donated the framed photograph of the English poet and playwright to the college in 1958. It was displayed in the library for a while but was eventually placed in the archives for preservation.