This post was written by guest contributor Courtney Butrymowicz. Butrymowicz, a student in Dr. Mastrangelo’s Spring 2016 Advanced Composition class, had the opportunity to work with archival materials to learn more about Centenary College’s history. This is an excerpt from her Archival Scrapbook Paper.

Editha Trevorrow was an invaluable person and staple to Centenary College and the surrounding community during her time as Dean of Students, interim President, and wife of the late President of Centenary, Robert Trevorrow from the years 1917 to 1943 (Custard, 195). She kept many scrapbooks during her years at Centenary, but one has contents that could only be described as deeply moving. The fact that students felt the need to invite her to their weddings and tell her about the births of their children after they had graduated, shows that Editha had a huge impact on these students’ lives. Other pieces of ephemera indicate that her role in the Centenary College community was just as prevalent and important. 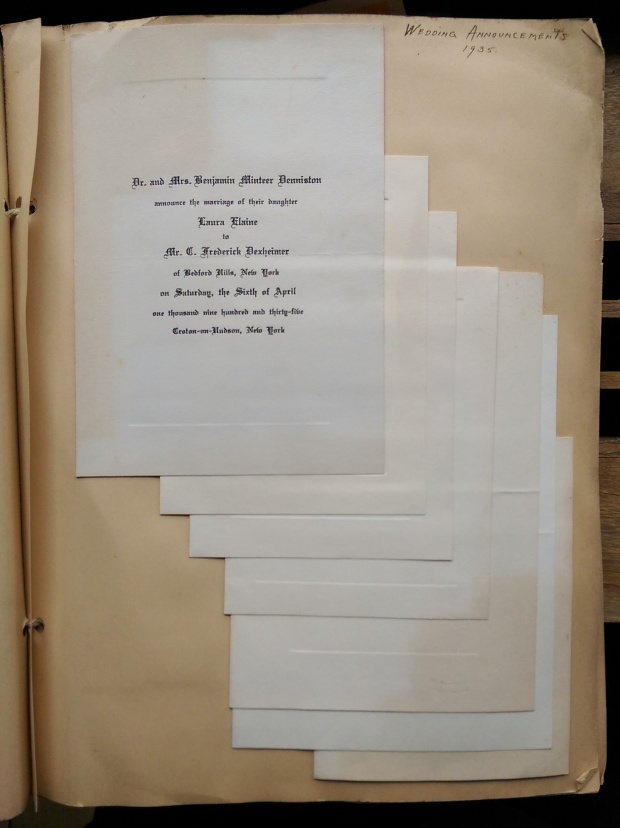 Editha Trevorrow was very active on campus as Dean of Students and made a huge impact on the students during their years at Centenary. Editha attended bi-monthly meetings with the Student Council, which helped resolve any disputes between students and administration (Custard, 185). She was very active in teaching and mentoring students as well. In 1929, Centenary became a Junior College, helping and teaching young women in high school and college. Editha Trevorrow took over recruiting and helping high school girls come to Centenary. She drove trucks to and from the school, and had meetings and interviews with prospective parents and girls interested in college. This boosted the Centenary enrollment rates, per the ten year plan, and now Editha was well-known amongst a huge majority of Centenary students (Custard, 175). She was invited to tea parties hosted by societies on campus, class parties, recitals, dances, and prose and poetry readings, which were performed by societies and students alike (Custard, 165). Editha received weddings invitations from former students and as well as their children’s birth announcements (Editha Trevorrow Scrapbook). She held a Weekly Young Women’s Christian Association meetings and was the chairwomen of the Junior Red Cross (Custard, 168). She helped young women form committees and knit to help the soldiers in World War II (Custard, 168).

After her husband’s passing, Editha took over the role of Centenary President until the college could find a replacement. The transition was smooth because Editha was already the Dean of the college, and so already understood the administrative duties of a President. She also previously had a good repertoire [sic] with the students and faculty as Dean of Students.

The scrapbook should be kept in the archives because if the scrapbook was not in the archives, people would not know what college was like in the 1930s and 1940s. By not having the scrapbook, Centenary would lose part of its rich history. Dr. Trevorrow and Editha Trevorrow influenced Centenary in a substantial way: they paid off Centenary’s debt, introduced new and innovative programs and classes for the college, and helped the surrounding community…This scrapbook truly captures her life at Centenary and what it was like for a student to go to Centenary.

This document was reproduced as it was written by Courtney Butrymowicz for her Advanced Composition class. No changes have been made.